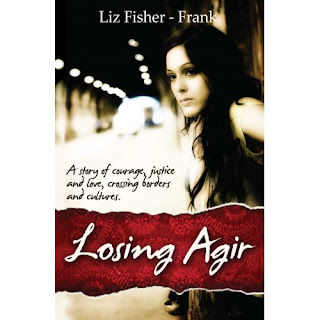 Losing Agir: A story of courage, justice and love, crossing borders and cultures
Partly based on fact. this is the story of two young people, united by experiences of family separation and loss, whom, in their search for justice, find friendship and even love.
This is the story of Alice, a 15 year old in care and her relationship with Agir, a Kurdish boy smuggled into the UK following the violent destruction of his village in South-East Turkey. As Agir's terrible tale unfolds, Alice learns the truth about her strange and unnerving foster home. Against the backdrop of her own family tragedy, does Alice have the strength to challenge her foster father to free Agir from his clutches?
I am delighted to welcome Liz Fisher-Frank to Bookster Reviews today, answers questions about her debut novel, Losing Agir. Her answers are fascinating, enjoy reading them everyone!
1) How did the idea for Losing Agir come about?

I decided to have a go at writing when, for a short period, I had to commute to London one day a week and I wanted to do something on the train. For many years I’d been representing young people in care through my work as a lawyer. So it made sense for my main character to live in the care system. I’d also always been very interested in a case my husband, a human rights lawyer, had taken to the European Court of Human Rights in Strasbourg. In this case, a Kurdish village was attacked and destroyed in the early hours of the morning. Villagers were pulled from their homes, families were separated, homes were burned and livestock killed. The village men were then forced to walk blindfolded, many of them barefoot, through the snow for many hours to imprisonment. The court found, years later, that the villagers human rights had been breached that day and they won their claim for compensation. ‘Losing Agir,’ starts at the attack on this village and sees my character, 16 year old Agir, separated from his family during that chaos of that day. He later gets smuggled into the UK and there, in a slightly sinister foster home, meets Alice, a 15 year old struggling to come to terms with her own story of loss.

2)  Alice, one of the central characters, is in foster care. Can you tell us about your own experiences of working with young people in care?

I have worked with many young people living in the care system. What is so apparent is that their stories are always so totally different as to how and why they are living in care. For some, it’s because of parental illness meaning that a parent, due to physical or mental health problems, simply cannot look after the young person. For others it’s because of family breakdown, bereavement or abusive relationships which mean staying at home is just not possible. Many of the young people I met have had very supportive and committed foster parents and/or children’s homes. However, some had not been so lucky. In my book, Alice is desperate that her new foster home is ‘the one, the one which works.’ Like so many young people, Alice has moved about the care system. Also, again, as can be a real problem for young people in care, Alice is having difficulties in seeing her brother who has been placed many miles away. These are just some of the problems which young people in care can experience.  My feeling is that any young person, living away from birth parents for whatever reason, should be given the utmost support and help from our care system.

3) Losing Agir was published on Human Rights Day (10th Dec). Do you feel its important for young people to learn about law and rights?

I feel it’s really important for young people to have an understanding of law, rights and responsibilities. During my work representing teenagers, their problems often seemed to have many layers of complication. It always struck me that if help and information was available very early on, there would be a good chance that problems could be sorted out before they became too big and complex. I would love to see more work done in schools about law and rights and if my writing could, in any small way, raise an awareness of some issues, I would be delighted.

) Did you have any actors in mind when you were writing the central characters? Who would you like to play Alice if the book was every brought to the screen?

Now that’s a tricky question as the thought of my story being adapted for screen is something that I haven’t ever let myself even dream about. But if you’re forcing me too, then, I think I’d struggle with any of the famous names out there. If, in that wonderful world of daydreams, it was ever screened and I had a say in the central characters, I would like Alice and Agir to be unknown actors. I have very firm pictures of them both in my head, which I tried to explain to my friend when she suggested that, if ever anything happened with the book, it really would make sense to get Daniel Craig to play 16 year old, Kurdish, Agir.

5) Would you ever write about Alice and Agir again? Where do you see them in 10 years time?

Yes, I think I would. Without wanting to spoil the ending, the book is left in a place whereby both characters still have a lot more to do in their lives. I would really like to write about this and the twists and turns their lives inevitably take. Just now I am focusing on the publication of my next two books, ‘Discoveries,’ (the story of 15 year old who finds out she is adopted) and ‘The Silk Slaves of Bangalore,’ (the story of a young person who uncovers the use of child labour in the silk industry). After that, it would be great to revisit the world of Alice and Agir and see how things are.

Thanks for those fab answers Liz! Readers check out Losing Agir, published by Live It Publishing, and is out now. It is available to buy on Amazon or The Book Depository.