REVIEW: Diary of a Mall Girl by Luisa Plaja 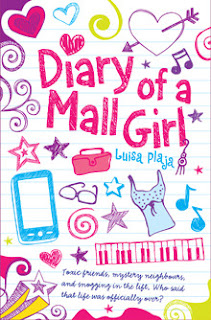 The mall is the heart of the fifteen-year-old Molly’s suburban town. Most teens hang around with friends there, get their first job there, and experience their first kiss there. And Molly? She actually lives there, in the complex’s residential wing, where she navigates the dramas of teenage life. But is living in a massive shopping centre as much fun as it sounds? Well, yes… and no. Find out the whole truth in Molly’s private diary!

I LOVE Luisa Plaja's books, and I was so excited when I heard about Diary of a Mall Girl being published in novel form. I remember reading and voting on it back in 2011 on Fiction Express(wow, was it that long ago? Time flew.... :O) and I really liked it then, but (if possible) I loved it even more this time! I loved Molly, and Jewel, and Jamie and Liam and all the rest, but I especially loved Jasper! Jasper is my new favourite fictional boy. He was amazing, and I just loved him :) He was definitely my favourite character in the book! I loved him and Molly :) Molly was such a fantastic character, and her life was very fun to read about. There was always something going on in 'Diary of a Mall Girl', love triangles, main plots, sub-plots, main plots connecting with sub-plots... There was never a dull moment! I couldn't put it down, and I finished it in just a couple of days (which is impressive for me, because I've been really slow at reading lately!).

I loved the fact that Molly lived in a mall. It was such a cool idea, and I was so envious - I kept thinking of all the things I could do if I lived in a mall. Keeping in mind, that I live in the middle of nowhere and the nearest shopping centre is half an hour away ;)

I didn't like Molly's friends Ameera and Wendy. Ameera was incredibly annoying and had no mind of her own, and Wendy was really moody and irritating, getting cross at nothing, and that really put me off her. I suppose they did improve a bit, but I still wasn't really impressed. I really liked Jewel though, she was an interesting character. I wish we'd seen more of her though, she only popped up here or there, and I think she had a lot of character potential. Molly's brother Jamie and his friends Liam were lovely, I really liked both of them. Jamie was really funny, and Liam was so sweet!

Since I had read Diary of a Mall Girl before on Fiction Express, I already knew all of the plot twists, but, honestly, that didn't take away from my enjoyment one bit! It was nice to read it again, and have it it novel form to read whenever. Diary of a Mall Girl is a brilliant book, just as wonderful as all of Luisa's other books. I loved it, and it's a definite must read for every teen girl!

Source: For review (A big thanks to the publisher for sending me this in exchange for an honest review!)
Format: Paperback

REVIEW: The Hobbit by J.R.R Tolkien 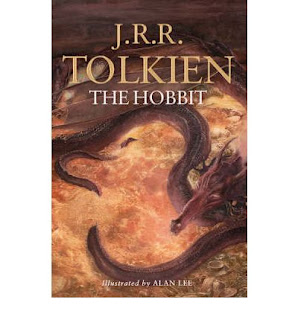 Bilbo Baggins is a hobbit who enjoys a comfortable, unambitious life, rarely travelling further than the pantry of his hobbit-hole in Bag End. But his contentment is disturbed when the wizard, Gandalf, and a company of thirteen dwarves arrive on his doorstep one day to whisk him away on an unexpected journey 'there and back again'. They have a plot to raid the treasure hoard of Smaug the Magnificent, a large and very dangerous dragon...

I read The Hobbit because I loved the movie, but I thought having seen the movie would take away from my enjoyment, but it didn't at all - I loved it! It's an absolutely fantastic book. Tolkien is an amazing author, and it is written brilliantly. With endearing characters, an exciting and eventful storyline, and flawless writing, The Hobbit is impossible to fault.

The Hobbit is quite a long book, and it took me over three weeks to read! Admittedly it does contain a few lengthy descriptions of certain scenes which could be tiresome to read, but most of the time the descriptions are wonderful and they are one of my favourite elements of the book. Tolkien's writing is simple, yet so beautiful, which is one of the reasons why this book is so appealing to both adults an children!

The world Tolkien creates is amazing! I don't think the name of the world is mentioned in The Hobbit, but I know from hearing about Lord of the Rings that it's called Middle Earth. It is great though! Wizards, dwarves, elves, orcs, dragons and men that can turn into bears are just some of the creatures that feature in the book. Middle Earth is so fun to read about, and The Hobbit is the perfect book to escape from reality with!

There was a lot of characters, and most very likeable. I ,f course, very much liked Bilbo! He was a cute little hobbit, and I liked the way even though he wasn't very happy to be on this cold, wet adventure, he was still brave and clever and a great leader when the dwarves needed him. There was lots of dwarves, and my favourite was definitely Balin - there isn't much to be said about him, but he was lovely, and really kind to Bilbo even when the others weren't.  Thorin was quite infuriating mostly , but he was alright sometimes! Gandalf was great - he was the character that always swoops in at the right time and saves the day, and I'll admit I have a soft spot for those characters, Gandalf being no exception!

I just wanted to note one thing - it's not a complaint, purely an observation, - I don't think there was a single female character in the whole book! Not even a minor one. Hmm.....

The illustrations by Alan Lee were beautiful, they were a great addition to the novel!

The Hobbit is definitely worth a read and the movie is fantastic too - I don't usually say this about books and movies, but for The Hobbit, I think it's better to see the movie before you read the book. The movie is great (in my opinion) and it is quite different from the book, so if you read the book first, of course you will be critical of the movie (as anyone does when they see a book they love adapted into a film!) and it will take away from your enjoyment, but the two are quite different, so having seen the movie first won't take away from your enjoyment of the book. That's just what I think anyway! Whichever you choose to do, definitely try and both read the book and watch the film, because they're both great.

I was disappointed to get to the end of The Hobbit because it really is unlike any other, and I knew I was going to miss reading it every evening! It has taken it's place among my list of favourite books, and I know it's one I'll be coming back to read again and again