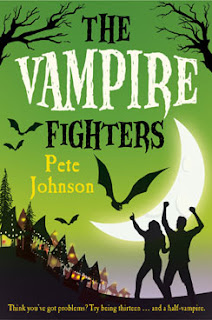 Today I am absolutely delighted to welcome Pete Johnson, author of the hilarious Vampire Blog trilogy, to Bookster Reviews as part of the blog tour for his latest book, The Vampire Fighters, which is the last book the trilogy. The Vampire Fighters is published on the 5th June by Corgi Yearling. I have a brilliant guest post written by Pete about his writing experiences to share with you. Enjoy!

‘When you write, do you wait until you feel inspired?’
It’s a question I’m often asked. And it always makes me smile. For if I waited until I felt inspired, I’d never begin. As I can always think of a million things I’d rather do than write – really important things too like watching all those clouds in the sky floating past. No, I can only write one way and that is to start the moment I wake up and fool myself that I’m disciplined.

So by eight o’clock (sometimes earlier) I’ll settle down with a notepad and pen (yes, I still use one of those) and in an easy, relaxed way think about what I’m going to write today. This kind of loosening up is especially important when I’m writing comedy. For there’s a certain comic energy, vital for a humorous story which cannot be summoned – only wooed.
When this comic energy nestles on your shoulder, it’s wonderful, fabulous, totally intoxicating. In fact, I can think of few more enjoyable experiences (No, honestly). But without it your prose feels heavy, lumpy and  dull.

When Spike Milligan was asked where his funny ideas came from, he said. ‘It’s an inspiration, but I know not from where. I suppose it’s me really but I can’t take any credit for it.’ That’s exactly how I feel. Great scenes – especially comic ones – almost always sneak up on you. Usually after you’ve spent hours chipping away at a particular moment and then suddenly it all just takes off. And it’s as if you’re witnessing it, not making it up. Often the very best scenes seem to have nothing to do with you.

I write all morning and then re-write in the afternoon. (Elmore Leonard once observed, ‘writing is all re-writing.’) And when I tell friends at the end of the day that I’m really tired, they just smile. Sometimes they’ll pop round in the day and find me walking round my garden. They don’t realise I’m plotting out a particularly tricky scene in my head and  that I sort out all my best plots when I’m on my feet, pacing about. (So apparently did Agatha Christie)

But I realise I am lucky now to be a full-time writer and to have the luxury of writing all day. It wasn’t always like that. Being a writer was my ambition from about the age of seven or eight. I was a very keen reader – thinking nothing of reading six books a week. Often I’d sit up for hours at night while the rest of the house slept, telling myself I’d read just one more chapter...

My all-time-favourite book when I was eight was ‘101 Dalmatians’ by Dodie Smith. So I wrote a fan letter to her, and not only did she write back, but we went on corresponding for over twenty years. In one letter she asked if I’d ever thought of becoming a writer as she was sure I’d make a good one. A question which changed my whole life.

But how to become a writer? Dodie Smith suggested I start by entering writing competitions (great advice which I freely pass on) and when I was twelve I won ten pounds. Dodie Smith told me the moment I got money for my writing was when I became a professional author. I won another ten pounds when I was thirteen. But the money wasn’t exactly rolling in after that, so I had to do other ‘proper jobs.’

But on Saturday and Sunday mornings I wrote stories, even a whole book, and for my efforts gained a magnificent collection of rejection slips. My friends told me being a writer was just a dream and it was time to grow up. But my family (and Dodie Smith) urged me on. I was briefly a teacher and took loads of notes about what I saw. I wanted to write a comedy about teenage life. I tried out my stories on the pupils and after a few drafts, it finally even made then laugh.

I worked and worked on this book, staying in every weekend to finish it. And it became my first published book – ‘Secrets from the School Underground.’ It sold moderately well. So did my next eight books.

It wasn’t until I wrote ‘The Ghost Dog’ that I had my first bestseller. Other books like ‘How to Train Your Parents’ and The Vampire trilogy have gone on to become best sellers in over twenty countries.

But the basic experience of being a writer never changes. It is still me, first thing in the morning, faced with a blank piece of paper and trying to bring to life that imaginary world inside my head.

An old school friend of mine said to me recently. ‘In lessons you were always being told off for day-dreaming. But really that’s all you are doing now, isn’t it? only now you’re also getting paid for it.’

I hope to go on day-dreaming for a long time yet.


Thanks for that Pete! Now onto the giveaway! You can win 1 of 3 sets of all three books in the trilogy! All you have to do is read the rules and then fill in the Rafflecopter below. Good luck!


a Rafflecopter giveaway
Posted by Cliona at 6:47 AM